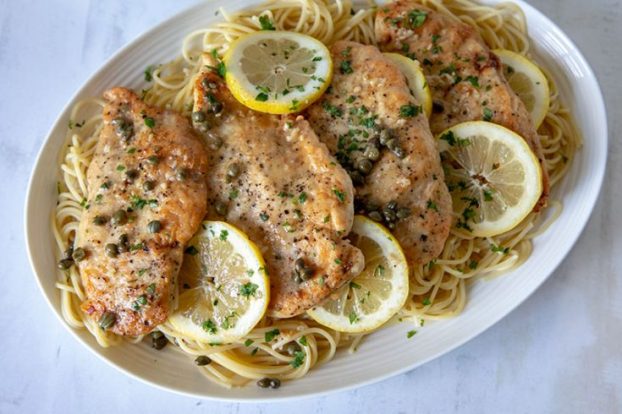 A gardener’s work is never done

Today’s Special is a favorite recipe. I’m rather tired and have achy shoulders, hips, knees and fingers from pulling weeds. I mean seriously getting after them, so a day of pulling weeds usually means a dose of Aleve at bedtime.  But it’s been so wet and cool, making perfect conditions to get in the flower beds and get it done.

Soon, I hope, the sun will shine, temperatures rise and the weeds will be gone, or at least much more manageable.

Pulling weeds (and my goodness what a crop of poison ivy and poke saled this year) also makes me hungry and think about supper.  And last week I thought about Chicken Piccata, which I hadn’t made in a while, plus I had a jumbo-sized chicken breast in the freezer that needed to be used.

But also, while scooting along the edge of the front flower beds on my mother’s garden scooter, I thought about ordering carry out or going out for supper. DW’s usually game for whichever as long as it means we’ll have supper. But the “savory piquant” flavors of chicken piccata were too tempting.

I had all the ingredients plus angel hair pasta and garlic bread to sop up the rich sauce. Picatta is Italian for a dish of thin meat quickly sautéed and served with a sauce made from pan drippings, lemon juice, capers and parsley. See why I was thinking about this?

And, I was tired and dirty so going out wasn’t an option. Instead, I took a much-needed break, for it was nearly 5 o’clock and DW wasn’t finished mulching the garden, either.

Standing, stretching, and walking to the kitchen felt good.

I measured and assembled all the ingredients, set out all the necessary pans, filled one with water for the pasta and set out our dinner plates, a sure sign that supper is near.  Though supper was underway my outside chore wasn’t finished.  I updated DW on supper and went back to the flower bed.

Rain was on its way and it was a good time to transplant a few annual flowers that had re-seeded and gotten out of hand, much like weeds.  And I knew that once I sat down for supper I’d be pretty much done for the night.

Transplanting done, I went back in. Picatta is quick to fix (Molly) once you’ve assembled everything. The secret ingredient for this tasty dish is ¼ cup of capers. Sometimes you’ll find a jar of capers with other pickled foods in the grocery store, but other times it will be in the specialty food section, maybe next to the produce area, and most times asking where the capers are doesn’t help.  Once you find them buy a jar or two, and once opened keep in the refrigerator.

A caper is a juniper berry from a bush that is native to the Mediterranean. It’s the small ones from France that are best, but you might also find olive-sized capers from Italy and Spain. These berries are usually jarred in a salty brine solution and have a nice pungent flavor, which makes picatta marvelous.

Pound the chicken flat and thin to make an “escalope,” a French term for a thin piece of meat that needs only a few seconds of sautéing on both sides.  I sliced my one large boneless breast lengthwise into 2 nice sized servings.

After placing a generous sized piece of plastic wrap over the meat, I pounded the two pieces with a rolling pin, which is quite therapeutic…. take that you weeds!  Brown the meat in a nice sized skillet and cook the pasta in the meantime. Then make the sauce in the same skillet, deglazing (loosening the stuck particles), as you pour in the other liquids.

Use fresh squeezed lemon juice (never run out of lemons!) if possible.  Reduce the sauce to intensify the flavor; top the chicken with capers, lemon slices and fresh chopped parsley for the finish!

Confession: even though I only prepared 2 servings of chicken I cooked extra pasta and made the full recipe of the sauce because it is that good.  And next night’s supper was only a microwave minute away!  There’s always a method to my madness, so watch out weeds, I’m coming back for you!

Recipe of the Week

Pound breasts to an even ½ inch thickness. Heat 2 tablespoons butter and olive oil in heavy skillet over medium heat. Place flour in bowl; season both sides of chicken with salt and pepper chicken; dredge in flour. Add chicken, fry on both sides 2 – 3 minutes to a golden brown. Remove; set aside. Add broth to skillet, scrape bottom and sides with metal spoon to deglaze. Stir in wine, caper liquid and lemon juice. Simmer to reduce mixture to half.  Return chicken to skillet, top with capers, butter and lemon slices, simmer gently for 2 minutes; sprinkle with fresh chopped parsley. Serve over hot, seasoned pasta.

Jim Tom Copeland, a 2001 graduate of North Delta School and a four-sport athlete, has been named the new head... read more