Batesville and Sardis Court house closed Friday due to investigation 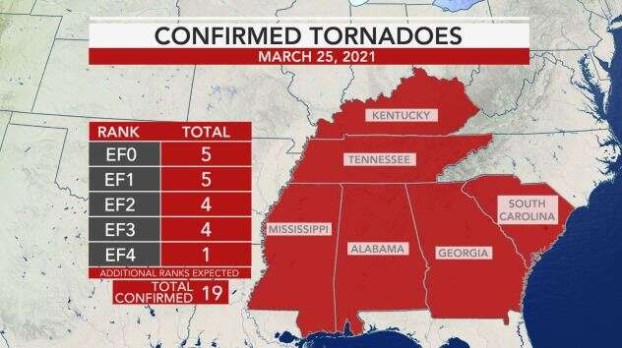 As the climatological peak of tornado season draws near in the United States, AccuWeather forecasters are warning that the season is just getting started. March, April and May are typically the most active in terms of tornadoes, but this year, April and May could be particularly dangerous as the ingredients come together for frequent outbursts of severe weather.

Many communities across the southeastern U.S. are still picking up the pieces from early-season storms, including in Mississippi, Alabama and Georgia, which were hit by back-to-back tornado outbreaks in March. This was only the second time that the National Weather Service (NWS) issued two ‘high-risk’ threats during the month of March, both of which were focused on the same region.

The preliminary tornado count through March 31 stands at 207 across the U.S., according to the Storm Prediction Center (SPC), nearly half of which were reported during two outbreaks, one on March 17 and another on March 25. The second of the two outbreaks was the deadliest, claiming the lives of at least six people. The same eruption of storms spawned an EF4 tornado that tracked through the Atlanta suburb of Newnan, Georgia, in the middle of the night.

After tornadoes paced well behind normal in January and February, March’s uptick reversed that trend. The 180 tornadoes in March easily eclipsed the three-year monthly average of 82 tornadoes, according to the SPC.

Residents in the Southeast are starting to become too familiar with the sound of tornado sirens and the roar of destructive winds and flooding rain.

“It’s nerve-wracking, but for the most part, everybody knows what to deal with, what to do,” Wesley Hamner of Tuscaloosa said.

The worst may be yet to come with severe weather season about to shift into high gear.

AccuWeather forecasters told Wadell they are predicting 1,350 to 1,500 tornadoes to touch down across the country this year, which is slightly above the annual average of 1,383.

That prediction is an increase from 2020 when a total of 1,245 tornadoes were observed, according to records kept by the SPC.

What is behind the anticipated increase in severe weather? AccuWeather meteorologists are pointing to several key weather influencers.

One of the bigger factors that will contribute to a busier-than-normal peak of severe weather season is La Niña, which is forecast to continue throughout most of the spring.

A La Niña pattern occurs when the water near the equator in the Pacific Ocean is cooler than normal, which influences the jet stream and the overall track of storm systems.

“There’s still going to be some lingering effects of La Niña we feel all the way through the summer, possibly into next fall and winter,” AccuWeather Lead Long-Range Meteorologist Paul Pastelok told Wadell.

That pattern not only stirs stronger winds high up in the atmosphere but also sets the stage for bigger clashes of cold and warm air, Pastelok explained. Both of those factors are ingredients for severe weather.

However, not all weather elements are aligned to create more robust conditions for severe weather development for all areas of the country.

According to Pastelok, severe drought conditions in the Plains could limit the thunderstorm activity in the region traditionally thought of as Tornado Alley, which spans from northern Texas through Nebraska.

Because of this, AccuWeather meteorologists are forecasting the worst of the tornado activity to focus farther east across the Mississippi River Valley and into the Ohio Valley and parts of the mid-Atlantic.

An Arctic blast in February, which unleashed record cold across the South and wreaked havoc in parts of Texas and Louisiana unaccustomed to the intensity of the frigid air, chilled waters in the western Gulf of Mexico — another factor that will play a role in where severe weather will develop this season.

“It’s the central Gulf that looks warmer right now. There may be more concentration of severe weather in the central Gulf states and the Tennessee Valley more than there will be in the Plains,” Pastelok said.

As of March 31, the water just off the coast of Texas was around 65 F, compared to the water in the central and eastern Gulf of Mexico which was around 81 F, according to NOAA. As long as the water remains cool along the coast of Texas, it will limit the amount of warm, humid air that can be lifted over the Plains to aid in the development of severe weather.

Even with some limiting factors anticipated, AccuWeather meteorologists have pointed to some frightening similarities between the current tornado season and the deadly and historic 2011 tornado season.

April of 2011 was one of the deadliest months for severe weather in U.S. history with 321 lives lost amid outbreaks. This was the same year that Joplin, Missouri, took a direct hit from a catastrophic EF5 tornado. That exceptionally stormy year also holds the record for the highest number of annual tornado reports at 2,240, according to SPC.

However, Pastelok said this year’s setup is not exactly identical to 2011, so the overall number of tornado reports may end up being different.

Already storm-pummeled areas of the South aren’t the only ones that will have heightened storm risks this season. Parts of the mid-Atlantic and Ohio Valley are likely to face more tornadoes than normal, too.

Pastelok said he is particularly concerned about tornado strikes in these regions during late May, June and early July, adding that a lot of moisture will be funneled into this part of the country and will act to fuel potentially damaging episodes of thunderstorms.

With 207 tornado reports as of March 31, that number could easily triple or quadruple by the end of May, the month that typically features the highest number of tornadoes.

Even though May is known for the number of twisters that touch down throughout the month, over the past three years, April has averaged more deadly tornadoes than any other month, according to the SPC. In April of 2020 alone, there were 13 tornadoes that turned deadly.

The peak of the severe weather season could lead right into a busy tropical season, with the 2021 Atlantic hurricane season commencing on June 1. Landfalling tropical systems are known for spawning tornadoes, a contributing factor in the overall tornado forecast for 2021.

AccuWeather’s team of tropical weather experts, led by veteran meteorologist Dan Kottlowski, say another above-average hurricane season is also in the cards, albeit one that will turn out a bit less hectic than 2020’s non-stop season.