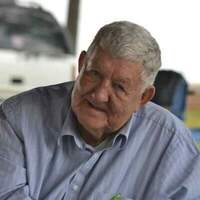 Johnny William “Bill” Cosby, Jr. passed away peacefully on Monday, Feb. 22, 2021, at his home in the Eureka community. His family and friends were there with him in his home going.

Funeral services will be 2 p.m. on Thursday, Feb. 25,  in the Martin Willingham Memorial Chapel of Wells Funeral Home with interment to follow at Eureka Cemetery. The family will receive friends at the funeral home two hours prior to the service at noon.

He was the owner of J.W. Cosby Trucking for about 72 years (since 1949). He started with one truck he obtained from his Dad spreading lime, and grew from there. He then helped to build the Enid Dam levee. They attached a cable from a dozer to the truck then let the truck down the levee to dump. This was the beginning of his gravel hauling business.

Later he was able to haul almost anything that could be moved by a truck, from heavy equipment, to logs. He also was the co-owner of B and C Diesel Services for several years in the 70’s and 80’s, located beside Huron Smith Oil Company in Batesville. With Danny Browns help they could repair almost every type vehicle.

Bill was a faithful member of the Eureka United Methodist Church.

Bill was an honest, hard-working man who truly cared for people and would always lend a helping hand. He had a wealth of knowledge about mechanical repair and almost any other subject in a conversation. He only attended school for just a few years, but he had more knowledge than most college graduates. Bill taught his family to work for a living and to be honest.

If everyone lived and taught their family like he did, this world would be a better place. We all thank God for Bill and will miss so very much.