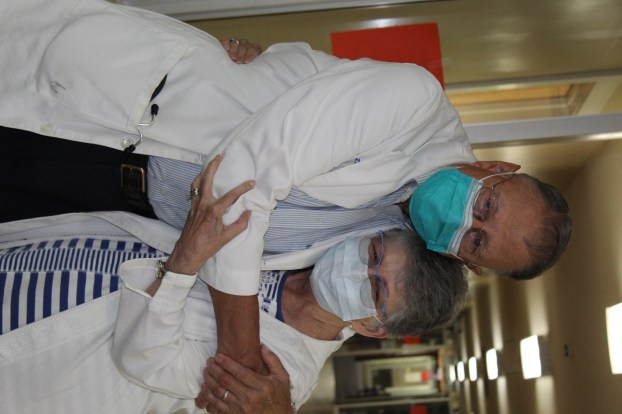 In the summer of 1970, a young energetic general practice physician was fresh off a tour as a Vietnam flight surgeon and headed for a residency in pediatrics when he agreed to take a year off from his studies and work at the Batesville Hospital for a few months.

That was 50 years ago, and Dr. David Alford Ball has been seeing patients in Batesville since he agreed to stay that first year.  For more photos.

On Friday, July 17, his family and staff surprised him with a celebration in the clinic’s waiting room, where he recalled his early days as a young doctor and reminisced with friends, co-workers, and patients from the five decades he’s treated health needs in Batesville and Panola County.

Dr. Ball joined a hospital staff that included Dr. Benjamin Moore, Dr. John R. Lovelace, Dr. N.C. House, and Dr. George Carlson. He put off pediatric specialty schooling and worked long hours at the hospital where part of his job included earning the trust of Batesville citizens, some of whom wondered if such a young man could practice medicine as skillfully as the older doctors they had known for years.

It wasn’t long before the people of Batesville, and all of Panola County, made Dr. Ball one of the most popular in the county, and he, in turn, fell in love with the city and its people. That relationship is stronger than ever now, having endured the challenges and changes of medical insurance and government assistance that has made the delivery of primary care in a rural area a daunting task for the most experienced doctors.

Dr. Ball was born in 1942 in Columbia and was just 18 months old when his father died. His mother, a primary school teacher, raised their two sons to love God and family, instilling a strong work ethic along the way.

He graduated Columbia High and entered Ole Miss, working the cafeteria and joining ROTC to help pay his way. He earned good grades in the undergraduate medicine program, and was set to enter medical school by his senior year.

With no money for a car, he would sometimes hitchhike to and from Columbia to visit his mother, but a pretty co-ed from Batesville named Patricia Odom was also occupying much of his free time and attention as well.

The sweethearts married in June 1964 at First Baptist Church Batesville, saying their vows before pastor Dr. J.R. Davis, who had also been Dr. Ball’s pastor years before in Columbia.

When he graduated with a general practice degree from the University of Mississippi Medical Center in 1967 he joined the Air Force and was sent to Lackland Air Force Base in San Antonio for an internship.

After a year at Lackland, and now with a new son, David Warren, the Ball family transferred to Brooke in San Antonio for flight surgeon school and then to Maxwell Air Force Base in Montgomery, Ala.

In May of 1969 Dr. Ball received orders for Vietnam, and his young family moved back to Batesville when he left for his tour. Mrs. Pat and baby David Warren lived in a mobile home next to her mother’s house on Bates St. while he was serving his country in the war.

Dr. Ball spent 1969-70 in Vietnam after attending Jungle Survival Training in the Philippines. The Air Force stationed him at Cam Rahn Bay, Na Trang, and Tui Hoa, where part of his duty was treating children whose families have been ravaged by the war.

It was there, in the shabby jungle orphanages of Southeast Asia, his desire to become a pediatrician was kindled. He turned down a promotion to major and resigned the Air Force as a Captain, intending to get his wife and son from Batesville and go back to school.

When he returned to Batesville, Dr. Carlson convinced his work at the Batesville Hospital for a year, saying he could always pursue children’s medicine if he didn’t enjoy his stay. But, Dr. Ball did enjoy working in Batesville and began to settle here when the family built their first home at 106 Vick St.

In 1971, another son, Patrick Andrew arrived, and four years later came the Ball’s youngest, daughter Sarah Dale. She is the only of the three children that Dr. Ball delivered.

The family had bought Berkshire Acres, the farm he still owns on Eureka Rd, in 1975, and Dr. Ball built the house and barn that are on the property. Woodworking has been a lifelong passion, and he had considered a career in engineering before settling on medicine.

Dr. Ball had a practice at Batesville Clinic and worked at the hospital, staying on after the hospital was given to the Board of Supervisors and became South Panola Community Hospital. For about 25 he worked days at the clinic and many nights at the hospital’s emergency room.

The duel work satisfied the doctor’s different passions – family medicine and children at the clinic, and trauma cases for which he had been trained on battlefields. Daughter Sarah Dale remembers her father working long hours when the children were growing up, the hospital sometimes being the only way to spend time with him.

“Daddy worked twenty-four, seven in those days. He would come home for supper and head to the emergency room,” she said. “Back then the hospital’s insurers required him to stay overnight at the ER and if we wanted to see him we would go spend the night with him there.”

Later on, insurers allowed physicians to be on call and stay at their own homes if they lived within five miles of the hospital and Dr. Ball could sleep in his own bed. Those days, too, hold special memories for Sarah Dell.

“When I was junior high or high school he started getting home around ten and we would always watch Perry Mason together and then go to bed,” she said. “Sometimes we would watch M*A*S*H, too. That was always my time with daddy.”

Dr. Ball continued to deliver babies and work in the emergency room until the 1980s when insurance costs became prohibitive for general practice physicians to do that type of work.

Dr. Ball served as a preceptor for the University of Mississippi Medical Center for many years and several young doctors, including his son David Warren, chose to do a month’s rotation under his guidance.

Sarah Dale chose law school, a decision that Mrs. Pat says was best to keep the doctors in the family out of trouble. She wound in the medical field ultimately, working at Tri-Lakes Medical Center and Clarksdale Regional Medical Center.

In 1989, Dr. Ball wrote an article that appeared in the Mississippi Journal of Medicine about the medical aspects of the Crucifixion of Jesus, and from that passion was born The Cross Ministry, Inc.

Dr. Ball traveled the country for years speaking on the subject of Christ’s sufferings from a medical viewpoint. He recently turned over the ministry to Carol Ann Lightsey.

Dr. Ball has taught Sunday School for more than 40 years at First Baptist Church. His hobbies include woodworking and he loves old cars, especially his MG TD. He is an avid reader, and plays solitaire to keep this mind sharp.