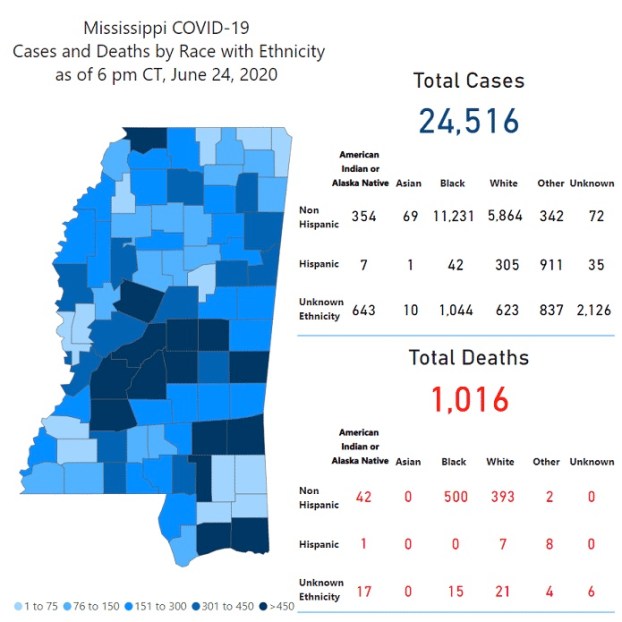 The State Dept. of Health is reporting 1,092 new positive cases of COVID-19 in Mississippi, and 5 deaths.  Data was collected from Tuesday at 6 p.m. to Wednesday at 6 p.m.  A total of 1,016 deaths in the state have now been attributed to the coronavirus from the 24,516 cases.

Officials say a combination of increased daily testing with less social distancing in the general population has caused the uptick in positive cases during the past week.

In Panola County, there have been 17 new cases recorded in the last day (total of 221), with no deaths. Five of the 221 patients that tested positive in the county have died from complications of the virus since the state began keeping the numbers on March 11.

The state is reporting one new case in a local long term care facility. Previously the county had one reported case, and that patient was one of the fatalities.

Lafayette County has 14 new cases for a total of 303 with four deaths.

Tate County has a total of 221 (up 10 from Wednesday)  cases and five deaths; Quitman has 56 cases (up seven) and no deaths; Yalobusha has recorded 136 cases (up five) and seven deaths; and Tallahatchie has had 72 cases (seven more than Wednesday) with one fatality.

Cases and Deaths by County

Totals of all reported cases since March 11, including those in long-term care (LTC) facilities.

The numbers in this table are provisional. County case numbers and deaths may change as investigation finds new or additional information about residence.

Mississippi investigates and reports both probable and confirmed cases and deaths according to the CSTE case definition.

Confirmed cases and deaths are generally determined by positive PCR tests, which detect the presence of ongoing coronavirus infection.

Probable cases are those who test positive by other testing methods such as antibody or antigen, and have recent symptoms consistent with COVID-19, indicating a recent infection.

Probable deaths are those individuals with a designation of COVID-19 as a cause of death on the death certificate, but where no confirmatory testing was performed.

By Jake Thompson The City of Water Valley is officially the king of watermelons. Word recently came down from the... read more