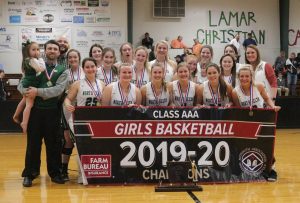 Say it loud and say it proud, the North Delta Lady Green Wave are the MAIS Class 3A state basketball champions.

The Lady Wave now advance to the MAIS Overall tournament at Mississippi College in Clinton where they will take on Class 4A  champion Simpson at 5:45 p.m. today.

This will make the second overall state appearance in the last three years for the North Delta girls.

Isabella Morrow chipped in with three points while Eliza Morris and Sydney Talley finished with two each.

North Delta reached the championship game with a 53-49 victory over Bowling Green, La. in Friday’s semifinals  which saw the Lady Wave erase a nine-point deficit.

“All of this really hasn’t sunk in yet. It seems surreal,” said North Delta head coach Harrison Nickle.

” I knew at the beginning of this season we had the experience to make a run deep into the postseason if we believed in ourselves and the process. We didn’t have much of a problem during the district and North State tournaments but we knew the state was going to be tough,” he said. “We got down to Bowling Green Friday, but we came together and pulled it out.”

“Our support from the school and community was amazing. We couldn’t have done it without them,” he said.

By Brad Greer The South Panola basketball Tigers wrapped up their regular season by splitting a pair of games at... read more