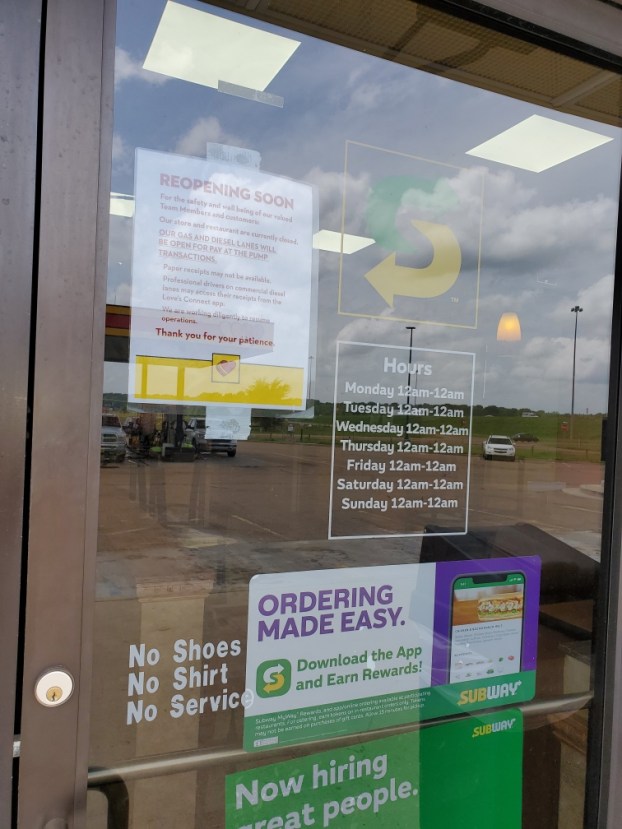 Panola County’s cases of COVID-19 increased more between Monday afternoon and Tuesday afternoon than any one day since the State Dept. of Health began keeping the data in mid-March.

The county had 16 new positive tests returned late Monday and Tuesday and reported about noon today – most of those from swabs taken between Wednesday and Friday of last week. Statewide, there were 653 new cases reported, and nine more deaths were confirmed.

Also today, the Love’s Travel Stop, along with the Subway and McDonald’s restaurants adjoining the store were closed temporarily with a notice on the doors that said the shutdowns were for the well-being of employees and customers.

The closed signs were still on the doors about 2:15 p.m., but customers could be seen entering the main doors at Love’s, and the McDonald’s drive-thru window was serving. The dining room doors remained locked at the fast food restaurants.

Telephone calls to the store were unanswered.

Businesses in Batesville are required to shut their doors for business and perform CDC-recommended cleaning and disinfecting procedures when any employee who has been in contact with other workers and customers is confirmed to be ill with the virus.

Panola County has six deaths attributed to COVID-19, and 270 cases. Health officials have not announced definitive hospitalizations or active cases in Panola, but estimate there are about 45 active cases.

Cole said some of the increase can be attributed to more testing, but noted that Panola County has a noticeable hike in patients who are very ill with COVID-19 symptoms, some requiring transferring to major level hospitals by helicopter.

“People need to go back to being as careful as they were when this first started because we had a handle on it better then,” Cole said. “These increases are not going to stop until everybody does their part to protect themselves, their families, and other people they come in contact with.”

Lafayette County registered 13 new cases in the Monday-Tuesday period, and now have 352 cases and four deaths. In that neighboring county, there are 42 active cases, health officials believe.

Several factories have reported active cases among employees, and have been contacted by county and city officials about management plans for quarantine of exposed workers and disinfection of affected areas of the plant.

In Mississippi as a whole, there have been three straight reporting days of at least 650 new cases and hospitalizations are also at their peak at 579,