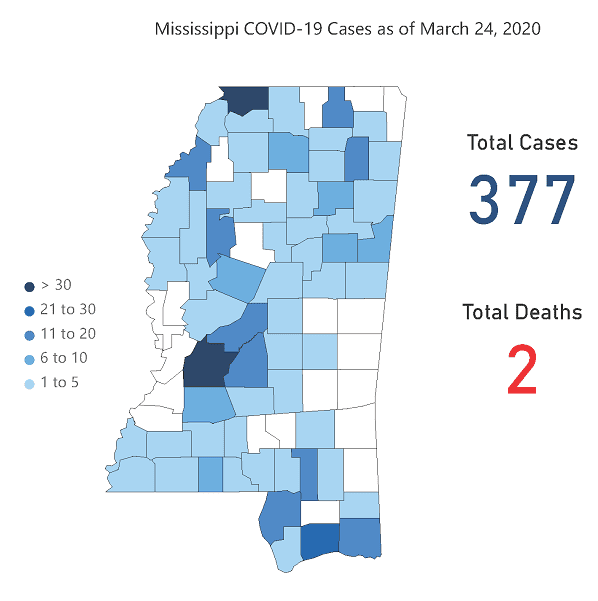 A third Panola County person has presumably tested positive for coronavirus and is hospitalized at Panola Medical Center, Batesville officials learned this morning. The information was given to the Mayor and Board of Aldermen at a 10 a.m. update.

The information was held by The Panolian until the State Department of Health made official release of numbers about 10:45 a.m.  The state’s official numbers for each of Mississippi’s 82 counties have been running about 1-2 days behind actual counts. Those offices, understandably, have been swamped with extra work the past three weeks.

Panola Medical Center COO Chris Ware said the hospital has not received final confirmation of a positive test, but that all other tests performed indicate that it is “highly likely” the patient will be diagnosed with Covid-19 infection. “We are taking every precautions just as we have from the beginning,” Ware said.

“This isn’t a surprise for PMC, we are prepared for this,” Ware said.

Hospital officials should receive paperwork from the patient’s test today. Nationwide testing is running about six days until results are confirmed and that has been the same for Panola Medical Center. Tests performed last weekend will probably not be back until at least this weekend, and probably Monday.

This is the third patient in Panola County to test positive for the virus that originated in regions of the Far East in Wuhan, China, and has systematically made its way around the globe, causing devastation in Europe and finally attacking North America.

Three states – Washington, New York, and Louisiana – have become especially infectious alarming health care officials across the nation. They fear a surge of infections and sick patients will overwhelm the system and eventually result in deaths that could not be prevented because of a lack of supplies or caregivers.

In Mississippi, there were 320 reported cases on Tuesday and 377 cases reported during the morning update from Mississippi State Department of Health officials. A second patient in the state – a 60-65 year old from Holmes County with underlying health conditions, died while in the hospital yesterday.

Amite, Calhoun and Prentiss Counties each reported their first cases yesterday, and are included on the new state count of 377.

In Panola County, the presumed case announced Wednesday morning was the first to have been tested here. The other two positives were tested in neighboring counties.

Panola Medical Center has tested approximately 30 patients for coronavirus and has received several negatives, and just the one suspected positive. Health care professionals there continue to perform test in a drive-up system approved by state officials.

Panola County Emergency Operations Director Daniel Cole reported to county and city officials last week he is full satisfied with the preparations the local hospital has made for the coming local outbreak and said there is a great plan in place.

Panola Medical has a dedicated floor for Covid-19 patients once they have tested positive for coronavirus, including 22 rooms that have been especially equipped to provide health care to those patients.

Batesville and Panola County residents started Hump Day with news that coronavirus is spreading in Mississippi and around the nation,... read more